Another FL date for Rick Springfield

*Shows are FREE with Epcot admission. There will be three 30 minutes sets by Rick on each day, times TBD.
Posted by springfieldandus at 3:05 PM No comments:

Posted by springfieldandus at 6:42 PM No comments: 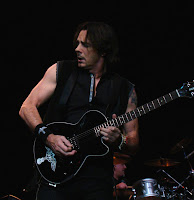 April 15 usually brings taxes to mind but this year it was…Rick is finally back in Ohio!

The night began with a band called These Guys Live, which was a great start to a “Rick Night Out”. We were anxiously waiting for Rick to stroll out on the stage. The moment arrived and there he was standing with his back to the audience, keeping us waiting for a little longer until he belted out Mr. PC.

I’ve Done Everything For You, got the crowd excited with Rick pointing to ladies in the audience. By this time sweat was already forming on Rick and he commented that it was getting hot, my thoughts exactly. After singing I Get Excited with some “heavy breathing” involved, he said, “I bet you didn’t know what the song was about when it first came out, but I’m sure that you understand now”.

Rick mentioned that he was going to sing Venus in Overdrive and wondered if we knew the words. Of course, we did, and responded with “Yeah, Yeah”. Signs were held up with the words and Rick commented that we had a visual aid to assist people who did not know the words. Each time “Yeah, Yeah” was sung; Rick gave a big smile to the ladies holding the signs.

Rick mentioned that they have had a lot of relatives dying recently and that I’ll Miss That Someday was about Matt’s dad. I’m always mesmerized when he sings it live and the emotions involved with the song, which we can all relate to.

Don’t Talk to Strangers is always a favorite part of the show since the crowd is involved. He had a few ladies sing and he made his usual comments about their singing abilities. Dave, the security guard was a good sport and sang without any coaxing, Rick laughed and said he didn’t know that DTTS could be sung in one note and that he sounded like a robot. I thought my time had arrived to finally get a chance to sing DTTS; Rick was standing directly in front of me, my heart was beating fast and darn if he didn’t ask the guy behind me to sing! He needed a little encouragement, but he came through and did a pretty good job. Temptation got the best of me at this point, Rick had on dangling suspenders, I couldn’t resist, I gave them a gentle tug!

Back on stage after DTTS, he talked about Hard to Hold and that he should have gotten an Oscar for the “best butt”. The lady beside me pulled out a miniature Oscar, which Rick noticed immediately, and it was passed to the stage. It was so cute when he mimicked the presentation of the Oscar by saying “The Best Butt Award goes to…..Rick Springfield”. You have to love the man’s humor, he was in a very playful mood the whole night.

Rick yelled, “Human Touch”, he said I’m coming out there, but don’t pull my suspenders. Was he talking to me? Again, he ended up right beside me, I was thinking this is a good night! Someone handed him a bouquet of roses, which he smashed with both hands and the microphone since he did not have a guitar to do the job. I was loving the rose shower until he just about hit me in the head with the microphone. But, that is the chance you take when Rick is standing near you. He ventured to the general admission area where there was a railing that he could do his balancing act on. I swear, he could walk on a tightrope with a little assistance, the man is brave!

While Rick was in the crowd during Human Touch, Matt snatched a purse that was laying on the stage. When Rick returned to the stage for Jessie’s Girl, he handed him the purse and Rick opened it and pulled out money, which he put in his pocket. He told the lady that he would buy her a drink after the show with the money. He pulled out a piece of gum and chewed it while he sang Jessie’s Girl. First time I saw that rendition of Jessie’s Girl, he can even sing it with gum in his mouth. After the song was over, he pulled the money out of his pocket, walked over to Derek and said that he did a good job tonight and paid him with the money he stole. Each band member received his pay for the night. He threw the remaining money into the audience.

Rick returned for the encore shirtless and sang Wasted and Kristina. Both songs are great choices for ending the night, which you hate to see, but it is inevitable.

I’ve Done Everything For You

Posted by springfieldandus at 5:57 PM No comments:

Rick Springfield and his fans

"My fans are the most amazing humans on this planet (and any others that are out there). I want to tell you about a new project I’m working on that is going to help the rest of the world realize how groovy you all are. We are going to be working with a company called Yellow Rick Road Productions and create a feature documentary that doesn’t just focus on me, but on you guys as well. Their camera crew is going to follow us (that’s you & me) around throughout the year at various concerts and events. They are going to film us at shows, listen to your stories, my stories and get all the information they can possibly pump out of us on this connection we all share. It’s going to be quite an undertaking and we’re all up for it! Stay tuned in and we’ll get you all the information on how you can get involved as it progresses. I dig you guys, now it’s time everyone else does too." - Rick

ORLANDO, FL – April 13, 2010 - Yellow Rick Road Productions, a Florida-based production company, announced today it will be embarking on the first-ever feature documentary about Grammy® Winning musician, songwriter, actor, and soon-to-be author Rick Springfield and his ardently loyal fan base. Springfield is best known for his 17 top 40 hits (including his now classic #1 song, Jessie’s Girl), his role on ABC’s hit daytime drama General Hospital, and most recently as a twisted version of himself on the Showtime hit series Californication. The documentary film, tentatively titled “An Affair of the Heart”, will begin shooting in early May and continue throughout the remainder of 2010. The film will be directed/produced by Emmy® Winning Director /Producer Sylvia Caminer and produced by entertainment and marketing veteran, Melanie Lentz-Janney.

“When Yellow Rick Road Productions approached us, we felt it would be really interesting to show Rick’s unique connection to his fans, ” said Rob Kos, of Doyle-Kos Management, Rick Springfield’s management company. “Their relationship is truly rare and compelling.”

Yellow Rick Road Productions was started by Lentz-Janney and Caminer. Caminer brings nearly two decades of film and TV experience to the project (www.dolgerfilms.com). She is a multiple Emmy® nominee and won “Best Director” for the Discovery/Travel Channel series Great Hotels. In addition to producing feature films and directing/producing documentary-formatted TV shows, she’s an active juror at numerous international film festivals. Caminer's projects include two documentaries, Angels Among Us and Tanzania: A Friendship Journey.

The filmmakers will be capturing and sharing with the world what it is about Rick Springfield that still creates a frenzy among his fans. Lentz-Janney, who owns and operates Doverwood Communications, Inc., a PR/Social Media/Marketing agency (www.doverwood.com) has worked with numerous celebrities over the past 20 years. Having been a long-time fan, she recognizes first-hand the unique relationship Springfield shares his fans.

The film will focus on some universal human desires, such as the importance of connecting with like-minded friends and the ability to create new memories as adults reminiscent of the carefree days of our adolescence. The filmmakers anticipate that viewers will be entertained and inspired by Springfield and his fans’ personal experiences to embrace their inner teenagers.

“We really felt at a time of such global uncertainty, we wanted to encourage everyone to find their own ‘Rick Springfield’ (i.e., whatever they are fanatical about - sports, hobbies, music, art, travel, etc.),” said Caminer, who instantly saw the unique perspective of this film and knew it could not be a standard rockumentary. “We hope our film strikes a chord with people and it encourages them to follow their dreams.”

Having performed for millions of fans over the last three decades, and showing no signs of slowing down, Rick Springfield continues to play 100 shows a year, sharing his love of performing with unstoppable energy and his unique brand of crowd interaction with thousands of fans each night. Springfield literally wades deep into the crowd at each show. In October 2010, his memoir titled “Late, Late at Night” will be released, and his annual five-day fan-oriented cruise is set to sail in mid-November 2010.

Posted by springfieldandus at 7:54 PM No comments: 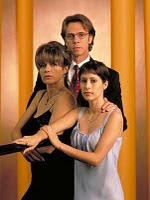 
Also a bonus for those of you who speak Spanish....Loyal Opposition, Terror in the White House is airing in and on the Spanish channel WTUF on Friday April 16th 8pm est. Check www.tvguide.com for your local listings.
Posted by springfieldandus at 8:52 PM No comments: