Stripped Down show in Midland 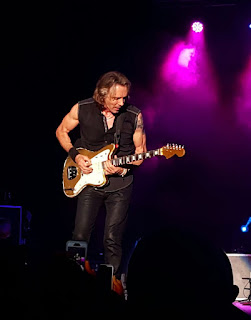 Posted by springfieldandus at 5:35 PM No comments: 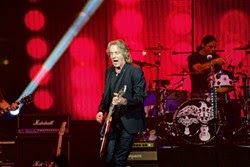 Photo by Scott Sandberg
It was back in May of 1993 that singer-guitarist Rick Springfield made his first Cleveland appearance in a long time at the Great American Rib Cook-Off. The gig was part of a summer’s worth of dates that would be a test run for Springfield who hadn’t toured in a number of years after a motorcycle accident sidelined his plans to tour for his 1988 Rock of Life album. That test run gave fans a chance to see Springfield play some rare club gigs and the shows sold out. Springfield quickly found that the fans were still there. Nearly 25 years later, he’s still coming around to Cleveland on a regular basis and “Kristina,” the riff-heavy rocker that he opened those ‘93 gigs with, from 1982's Success Hasn’t Spoiled Me Yet (Springfield was even selling a really cool vintage reprint of a Success baseball jersey at the merch stand), was the same tune that wrapped up the three song encore of his 90-minute set on a chilly and rainy Friday night at Jacobs Pavilion.

He’s 66 years old now — and only “two-thirds evil,” as he told the near-capacity crowd. “I’ll be fully evil when I’m 666 years old.” By the time he gets there, one can imagine that he’ll still be doing a lot of the same visual staples — thrashing any bouquet of roses that comes his way from the fans, with Pete Townshend-worthy windmill vigor across his guitar strings. “I’m the Morticia Adams of rock and roll,” he said. “You know, she’s the one that cut the heads off of the roses!” At this point, you’d think he’d be selling the roses at the merchandise table — there’s another revenue opportunity for you in addition to those autographed guitars, Rick.

He was out in the crowd two times, venturing down to travel along the front row to let fans sing a bit of “Don’t Talk To Strangers” — another standard bit, but on this particular night in Cleveland, the singers were, well, not too good. “You guys have the Rock and Roll Hall of Fame here,” he said. “Can’t anybody sing in fucking tune?” He was back out there for “Human Touch,” traveling throughout the crowded pavilion to get up close and personal with the fans. About the only Springfield staple that seems to have been sidelined in recent years is his habit of throwing his guitar high in the air and then catching it to end a song with extra flair. At 66 years of age, it’s probably wise to avoid those guitar-related concussions.

The setlist was fairly similar to last year’s show at the Rocksino — he’s still playing his fun cover of Katy Perry’s “Roar” and all of the hits, including a hefty stack jammed into a medley that starts with Hard To Hold’s “Bop Til Ya Drop and rolls through five more tunes, with a small tease of “Jessie’s Girl” dropped in the middle, just enough to get the crowd riled up and the medley finishes with a full-length run through “Love Is Alright Tonite” from his Working Class Dog album.

A new addition to this year’s show came in the form of two brand new songs that he’s been playing on tour, a preview of his next album, Rocket Science, which will be released in January, according to Springfield. “Down” was the highlight of the two, an energetic melodic rocker that he wrote with Jay DeMarcus of Rascal Flatts and one that bodes well, suggesting that the new album will continue in the rock-heavy vein of his last several. It was enough of a dosage to make us look forward to that new record and hopefully we’ll get to hear more new songs from that album in the setlist the next time he comes through.

Loverboy and Donnie Iris were a perfect rock and roll double shot to get things started. Iris opened the evening with a solid 45 minute set and he was battling hard against the elements when the rain was at its heaviest, but he and the Cruisers countered the weather with a satisfying blend of album tracks and fan favorites, including “Do You Compute” and “That’s The Way Love Oughta Be” and, of course, “Ah! Leah,” with the usual slowed down introduction stripped off — they cut straight to the familiar album version that continues to be heard on local radio to this day.

Celebrating a pair of anniversaries this year — 35 years for their self-titled debut and 25 years for their Lovin’ Every Minute Of It Album, Loverboy hit the stage hard with the title track from their Notorious album opening up their nearly hour long set. They put the ballads (songs like “Almost Paradise” and “This Could Be the Night”) to the side and turned the guitars up instead for hit after hit, including a power set of “The Kid Is Hot Tonite,” “Lovin’ Every Minute Of It,” “Hot Girls In Love,” “Turn Me Loose,” (with that one high note still right in the zone) and the set closing “Working for the Weekend,” a great way to start off the weekend on a Friday night in Cleveland, with cowbell.

Vocalist Mike Reno still sounds nearly album-perfect vocally (although he left the trademark red leather pants at home on this evening) and in addition to the hits, the band also served up a nice deep cut coming in the form of “Queen of the Broken Hearts,” which, “If you had MTV, you heard this one a lot,” Reno told the crowd. The band retains nearly its entire original lineup with bassist Ken “Spider” Sinnaeve, a member of drummer Matt Frenette and guitarist Paul Dean’s pre-Loverboy band Streetheart, subbed in for the late Scott Smith and they still sound great. As package tours go (with Iris being a very welcome Cleveland-specific addition), this one was all killer and no filler.
Posted by springfieldandus at 8:01 PM No comments: 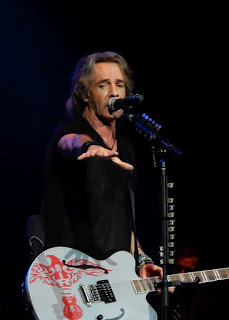 Posted by springfieldandus at 2:04 PM No comments: 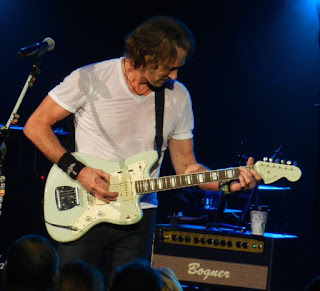 Another Florida full band show has been added to the tour schedule. That makes five shows for Florida in October.

Posted by springfieldandus at 8:57 AM No comments: 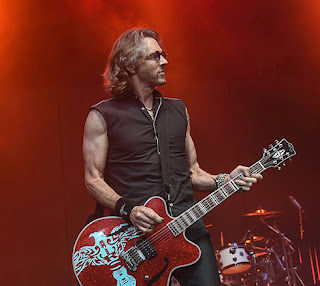 
You know you’re at a concert featuring bands from the 1980s when someone, like the woman seated next to me last night at Hard Rock Live at Seminole Hard Rock Hollywood, comments, with concern in her voice, “Oh my, look how puffy they are.”

While that may have been the case with opening acts The Romantics and Loverboy, who, from a sheer rock standpoint, couldn’t have been in finer form, the same couldn’t be said for the headliner on this blast-from-the-past triple bill.

Riding a wave of estrogen that swept through the aisles with tsunami-like force, Rick Springfield took the stage in a black sleeveless shirt—the better to reveal his seriously ripped biceps—looking like a rocker half his age. As we learned when he prompted us to sing him “Happy Birthday” (even though it was back on Aug. 23), that age is 66.

Whatever the Aussie-born actor/musician who brought Dr. Noah Drake to “General Hospital” is doing to stay fit, it’s working. The 50- and 60-somethings who were falling all over one another to snap selfies with Springfield in the backdrop hadn’t been that excited since Luke and Laura were married.

For his part, Springfield gave the wildly enthusiastic Hump Day crowd exactly what they wanted. He commanded the front part of the stage, keeping his four-piece backup band a good 6 feet behind him, almost like they were in time out. And he never stopped engaging his audience.

Currently riding his own wave of renewed interest—thanks to a creepy turn as an over-Botoxed plastic surgeon in HBO’s “True Detective” and a co-starring role opposite Meryl Streep in “Ricki and the Flash”—the ageless Springfield played his MTV videos in the background, posed for countless photos (one woman must have taken 147 selfies) and brought two young girls on stage to sing. Appropriately enough, during the song “Human Touch,” Springfield threw caution to the wind and walked straight into the cougars' den, accepting hugs, kisses, gropes, back issues of Soap Opera Digest—who knows—from every section of the audience.

On the music front, Springfield tossed in a few numbers from a forthcoming album, along with a Katy Perry cover (“Roar”), to go with his more familiar tracks. Back in the day, his heartthrob looks tended to overshadow the fact that Springfield could bring it as performer/songwriter. One of the evening’s highlights was a medley that proved as much, including two songs—“Celebrate Youth” and “State of the Heart”—off the underrated album “Tao.”

Earlier in the evening, Loverboy had the crowd on its feet with a nonstop barrage of hits that prompted one man to say, “I forget just how many great songs these guys had.” The high-energy set included hard-rocking versions of “The Kid is Hot Tonite,” “Turn Me Loose” and “Working for the Weekend.” The Romantics may not possess the same new-wave sneers they did in the late ’70s, but they also had some serious bounce in their step, bringing the crowd to its feet on songs like “Stone Pony” and “What I Like About You.”

Springfield closed the show with an encore that included his signature hit, “Jessie’s Girl,” then signed a few autographs before exiting stage right. If they could have, the ladies in the crowd might have smoked a collective cigarette. Needless to say, it was good for everyone. 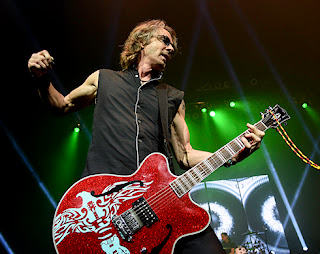 Rick Springfield
Light This Party Up
I’ve Done Everything For You
I Get Excited
Down
Affair of the Heart
Roar (Katy Perry cover)
Our Ship Is Sinking
Medley:
• Bop ‘Til You Drop
• Celebrate Youth
• Calling All Girls
• Don’t Walk Away
• State of the Heart
• What Kind of Fool Am I?
Love Is Alright Tonight
Wild Thing
Don’t Talk to Strangers
Human Touch
Love Somebody
EncoreJessie’s Girl
I’ll Make You Happy
Kristina

Loverboy
Notorious
Lucky Ones
Queen of the Broken Hearts
Take Me to the Top
The Kid is Hot Tonite
Lovin’ Every Minute of It
Hot Girls in Love
Turn Me Loose
Working for the Weekend
Posted by springfieldandus at 3:17 PM No comments: