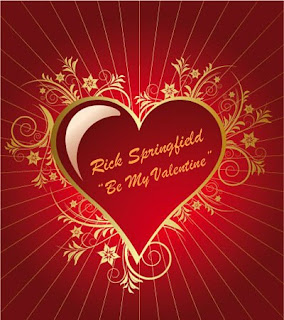 What better way to spend Valentine's Day than with Rick Springfield!

Posted by springfieldandus at 11:12 AM No comments:

FIRST SINGLE, 'LIGHT THIS PARTY UP', OUT NOW

Rick Springfield is bringing new music to his fans with a brand new studio album, Rocket Science. Springfield's 18th studio album will be released globally on Frontiers Music Srl on February 19th. Yesterday, December 9, USA Today hosted the world premiere of the first song from the album, 'Light This Party Up'. The song can be enjoyed here:
The album is available for pre-order now via Amazon.com (CD & MP3) here: http://radi.al/RickSpringfieldAmazon and Apple Music/iTunes here: http://radi.al/RickSpringfieldiTunes All MP3 pre-orders include an instant download of  'Light This Party Up'.
With 25 million records sold, Rick Springfield has withstood the test of time far better than most critics would ever have imagined, performing nearly 100 concerts around the world every year.  He has written and performed some of the best-crafted power pop anthems of the past 40 years, including 17 U.S. top 40 hits; among them, 'Don't Talk to Strangers', 'An Affair of the Heart', 'I've Done Everything for You', 'Love Somebody', and 'Human Touch', as well as the 1981 Grammy' Best Male Rock Vocal winning No. 1 single, 'Jessie's Girl'. Springfield has even more to say on his latest release, Rocket Science.
The new album features classic Springfield compositions like the crowd pumping 'Light This Party Up', the sensitive ballad 'Let Me In', the anthemic 'All Hands On Deck,' and the blues infused rocker 'Miss Mayhem', on which he collaborated with indie artist Tad Kubler of the band The Hold Steady. Rick also wrote 'Down' 'in the middle of an ice storm on a stranded tour bus'with Rascal Flatts' Jay DeMarcus.
Springfield says 'Rocket Science is my 18th studio album. It swears a bit and doesn't respect authority, but it does look after its invalid mother. It has some of the country elements I love, but as much as I understand we should all be sucking up to Nashville, it's still a wide ranging pop/rock record. I hope you dig it!'
Frontiers Music Srl President Serafino Perugino states 'Rocket Science is the fourth album that Frontiers is releasing with Rick Springfield, the first one that also involves the US territory. It's always been a pleasure to be at Rick's service, he's a true musical legend and his albums are always top notch. Rocket Science is no exception, and once again this will be a true delight for all his fans, myself included!'
Rocket Science is a pop/country blend fused with Springfield's signature songwriting and performance style, and features much of Springfield's touring band joined by some guest players. The album was mixed by veteran Justin Niebank, who gave the project it's tight feel. Other featured players include iconic guitarist and longtime Springfield collaborator Tim Pierce, plus songwriting partner and album co-producer, Elton John bass player Matt Bissonette.
In addition to collaborating and starring in the Dave Grohl documentary 'Sound City' and penning two New York Times best selling books, Springfield played opposite Academy Award' winner Meryl Streep in Jonathan Demme's 'Ricki & The Flash', plus a multi episode arc in the HBO series 'True Detective'. He also appears opposite Orange Is The New Black's Pablo Schreiber and actress Sosie Bacon in the forthcoming film, 'Traces'.
Pre-orders for Rocket Science are available now on Apple Music/iTunes and Amazon.com. Those who pre-order the MP3 version of 'Rocket Science'' will instantly receive the first single, 'Light This Party Up', with additional tracks made available in the forthcoming weeks prior to release. As an added feature, digital versions of the album will feature a bonus track, 'Beautiful Inside'.
Rick Springfield: Rocket Science
01. Light This Party Up
02. Down
03. That One
04. The Best Damn Thing
05. Miss Mayhem
06. Pay It Forward
07. Found
08. Crowded Solitude
09. Let Me In
10. All Hands On Deck
11. We Connect
12. (I Wish I Has A) Concrete Heart
13. Earth To Angel
14.  Beautiful Inside (Digital Bonus Track)
Pre-order your copy of Rocket Science:
Amazon.com (CD & MP3): http://radi.al/RickSpringfieldAmazon
Apple Music/iTunes: http://radi.al/RickSpringfieldiTunes
Posted by springfieldandus at 9:08 PM No comments:

Considering that he's been a rock icon for more than 30 years, it's hard to imagine that there are too many sides to Rick Springfield that we haven't seen yet. And yet, the "Jessie's Girl" singer — who's been moonlighting as an actor since the Seventies, and recently stepped up his onscreen game with roles in True Detective and Ricki and the Flash — is still full of surprises, even at 66. One didn't-see-this one-coming shock in particular: Springfield owns one of the world’s biggest collections of Star Wars action figures.
That's not a joke.

On the contrary, this could hardly be more serious, as we saw for ourselves when the musician invited Rolling Stone into his Malibu home for an exclusive look at his most prized possessions. "I've always been a toy freak," he admits, reflecting on how the first installment of George Lucas' space opera came out when he was at the perfect age to appreciate the merchandise. That was the start of a life-long passion, and his collection now includes everything from common Luke Skywalker editions to Turkish bootlegs and a "Blue Stars" model so rare that it's worth the down payment on a small house.

Needless to say, we were blown away — but to find out just how impressive it is to the world of hardcore "toy freaks," we went to Sotheby's and spoke to the dedicated super fans behind the auction house's massive Star Wars sale, Return of the NIGO. It turns out that they were genuinely awed by what Springfield has been hiding in his closet, where they're perfectly preserved inside plastic cases. "They're cheesy figures!" Springfield laughs. "They're badly painted, badly made … the only cool thing is the great artwork."

So just how hyped is Springfield for this month's release of The Force Awakens? "I actually like the toys more than I like the movies."
Posted by springfieldandus at 6:41 PM No comments: The Rick Springfield and Friends Fan Getaway has been announced for 2016.
Destination: Atlantis Paradise Island in the Bahamas - November 10 - 14th.

Rick says "It will be the best one ever".

For more information:
http://rickspringfield.com/bahamas-fan-getaway-trip-2016/
Posted by springfieldandus at 1:01 PM No comments: