This one is new! Rick returns to the Borgata!

Posted by springfieldandus at 7:04 PM No comments:

Pre-order today!
Posted by springfieldandus at 6:57 PM No comments:

Rick Springfield to play in CA on Sept 11th

confirmed on rickspringfield.com
According to ticketmaster, the special guests will be Peter Noone and Davey Jones
September 11, 2010
Lincoln, CA
Thunder Valley Casino
Tickets go on sale today on ticketmaster.com
Posted by springfieldandus at 8:48 PM No comments:

Touchstone Books Impatient for October 12th to roll around? Me, too. So I have great late-late breaking news to report: Moments ago, People magazine secured rights to run a pre-pub excerpt of Rick Springfield's memoir LATE, LATE AT NIGHT (Touchstone, October 12, 2010) in its October 4th issue, on stands September 23rd. Of course once you read that, you'll only want more even more. . .

Posted by springfieldandus at 5:49 PM No comments:

If it was any hotter here before Rick came to town, it would have burst into flames upon his arrival. Despite the heat and occasional rain we decided to make the most of our proximity to many local tourist attractions. CNN tour, Centennial Olympic Park, Pappadeaux restaurant, McCormick and Schmicks...we took in the sights and savored the flavors. Finally we strolled to Symphony Hall, and happened upon Jack White in the lobby! He had mentioned on Facebook that he was coming to town, and we looked forward to the possibility that he'd join Rick onstage for a tune or two.

After a seemingly short intro, Rick and the band appeared and plowed right into Mr PC. Momentary sadness over the disappearance of the jeans and boots was quickly overcome, and we loved him all over again in the black pants and sparkly converse. The next few songs flew by, without a lot of chatter from Rick. Finally, he reminded us of his upcoming birthday and quizzed us on his age. He asked us to sing to him, and of course we obliged. We were treated to I Get Excited, which seems to be making many appearances lately.

Alyson was up next, one of my personal favorites...but alas, no crotch grabs this time. Souls followed, and Rick forgot the lyrics pretty early on. Almost back on track, then off again, and finally had us sing Happy Birthday to him once again so he could buy some time and get himself straight! (How lucky is he that we find this cute?) There were some guitar difficulties throughout the show and even an incomplete pass to George N, which forced Rick to commandeer Matt's bass. He did an impromptu Gimme Some Lovin', before getting back on track with his own guitar and our least favorite cover, Crossroads. Whatever happened to Jet?

DTTS was coming soon, and the kids were already pouring up on the stage. We immediately recognized two little girls from a Nashville show this past February. Rick remembered them, too! The cousins who don't even like each other. Those girls can dance! Rick kept up with them, showing us that he has more spring in his step than Tigger. There were some stage jumpers that gave George N and the security guards a run for their money. Onto Love Somebody, and then out into the audience for some Human Touch. Stumbling, bumbling and overzealous fans made for a treacherous trek. He made it back alive, but not completely unscathed.

Time for Jessie's Girl...but not before a quiz on most recognizable open

ing riffs. We knew the show was nearing a close, and still no appearance by Jack White? Surely he'd show up during the encore. The break was quick and the guys came back out with a rockin' Kristina. Rodger was caught singing along, and yes Rodger, I know you saw me catch you doing it! He was soon replaced by Jack for Wild Thing. Finally a crotch grab, a perfect way to end the show! The town was hot, the show was hotter, and Rick was the hottest ever. They don't call it Hotlanta for nothing.

Smokin' Hot Highlight:
As he set us up to help him out for VIO, Rick asked where his Yeah Yeah girls were. Luckily the Jersey Girls did not let him down, Jackie and Julie (honorary Jersey Girl), JoAnn was a bit distracted to assist were conveniently located front and center, and holding their orange signs proudly. YEAH YEAH! 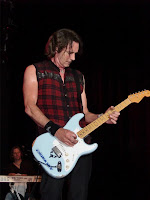 Here are some European Tour dates, with possibly more to come (yet to be confirmed on Rick's official site):

Photo by Andrea Hauser
Posted by rickspringfield_us at 10:34 PM No comments: 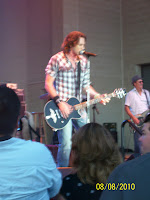 My sister and I drove 2 1/2 hours from Cleveland to Sylvania to see Rick at Centennial Terrace. This is an outdoor venue that doesn't have chairs as seats but benches. We found our row and watched everyone else fill in as 7:30 approached. An opening act performed and Rick finally came out around 8:30. Security was very tight and the audience was not allowed to do things they are normally allowed to do at a Rick concert, such as going closer to the stage to take pictures. Of course, Rick fans found their way closer the stage, myself included. Rick came out wearing sunglasses, which came off quickly, jeans and a flannel shirt with the sleeves rolled up. As usual, he looked amazing and rocked the venue!!

After a few songs, Rick sang "Souls," because we were in the Midwest. It was great to hear an oldie but goodie. Rick told the audience that his birthday is coming up soon and asked, "How old am I going to be?" While he was talking, he began unbuttoning his shirt and made everyone go wild. He said, "I want you to sing happy birthday to me, is that too much to ask?" So we all sang to him and he sang to himself, laughing at the same time. It was great to see him having such a good time.

When Rick wanted to change shirts, he stood behind a folding door and when the guys moved the door the sound man was standing there. Rick changed into a sleeveless black shirt and joked around about being 61. During "Don't Talk to Strangers," Rick brought up 3 girls and 1 boy, 2 of the girls were twins and Rick had a great time dancing and singing with them.

The show ended with Rick singing "Wild Thing" and "Kristina." It was another fabulous and fun show in Ohio.
Posted by RickSpringfield&Us at 9:47 PM No comments: 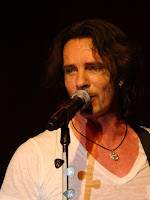 Rick made a fashion statement when he walked on stage, wearing a black jacket with a cool design on the back, black pants and white t-shirt with his black and white sneakers. He was loaded with energy and said it was good to be back with the band because the night before he did an acoustic set by himself. He didn’t say where he performed, but I would have loved to have been there.

We got a special treat when Rick sang Souls. He said since we were in the Midwest, he felt it was appropriate to play. When he said he was going to play the Yeah, Yeah song (Venus in Overdrive) he asked if we believed in aliens. He made a wise crack about George being an illegal alien, to which George responded, “I am not!”

Love is Alright Tonight brought a couple pairs of panties flying on stage with one actually landing on Rick’s guitar, which dangled there through the remainder of the song. He commented at the end that it was a great shot, kind of like when you play the game throwing the ring around the bottle at a carnival.

Rick mentioned that he had a book coming out in October. He said that he probably would have to take some time off after it comes out since it is so revealing.

A security guard was chosen as the first victim for Don’t Talk to Strangers, he had a very deep voice and Rick asked if that was his normal voice. The guard said that he was sick; Rick asked if anyone else wanted to sing and use the microphone that the sick security guard used. He continued out into the crowd and asked if anyone sucked at singing. He was standing about four chairs away from me and I waved my hands to get his attention because I definitely cannot sing but I wanted to anyway. He proceeded to my seat and stopped right in front of me. My moment finally arrived (after a six year wait), I belted out DTTS, after which he said “you do suck!”

This was one of the best concert experiences that I’ve had and Rick has a way of making dreams come true. 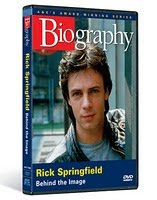 BIOGRAPHY: RICK SPRINGFIELD is the story of the performer who has sold fifteen million records and after nearly thirty years in show business still performs with the reckless abandon of a twenty-something rock star. Springfield's hit song, Jesse's Girl became the anthem of the 1980s - a time when his feathered hair, tightly-suited body and boyish face became hallmarks of the era. Concert footage, photos and interviews chronicle his early life in Australia and his career - a path that has taken him from teen idol to TV soap star to serious rocker. Includes interviews with former managers Steve Binder and Tom Skeeter; his mother Eileen Springthorpe; musician Sammy Hagar; drummer Jack White; actresses Linda Blair and Jacklyn Zeman; and record producer Keith Olson.
Posted by springfieldandus at 9:35 PM No comments:

Here are confirmed events for the release of Rick's autobiography, Late, Late At Night. All dates and times subject to change.

October 16th
Mall of America signing – 2:00pm
Location at mall to be determined
60 East Broadway, Bloomington, MN 55425
*Barnes & Noble will be the bookseller