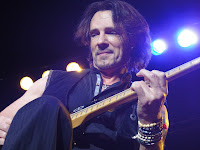 The Vermont State Fair show of 9/8 was well worth the 2-1/2 hour drive from the Massachusetts border. Despite a forecast of a few thunderstorms for the day in Rutland, VT? We drove up anyway silently singing "rain, rain, go away...". It must have worked. Although the clouds lingered, the sun occasionally poked through. We had time to see the fair exhibits, with time to spare towait in line for the general admission seating that was in front of the stage. Well worth the waitto meet a new friend. She'd waited 30 years to see Rick live for the first time. Her reaction to his coming on stage was priceless. C'mon, you must remember the awe of your first time! We made sure she was in front of us right at the stage so she could enjoy an awesome first concert. The rose explosions were an unexpected treat for her, as well as having a guitar pick tossed her way.

After one of the best introductions by a radio personality, MIX 98.1 WJJR's Nanci Gordon, Rick the stage giving 110%. He was ON. Despite the cool weather. Wearing black striped suit type pants, what appeared to be matching shirt with the sleeves off, and a black vest, the one with the chains printed on them, suspenders dangling in back, he opened with "Who Killed Rock and Roll." The audience was stoked from this get go and it just romped forward from there.

Highlights besides the songs were his chattiness over a Mission Magic DVD someone brought, which he graciously signed and gave an example of his Australian accent during that time period. Playing with a blow up hammer a young boy named Tyler had won and was gleefully playing air guitar on in the audience. Rick borrowed it to "hammer" on Rodger. Rodger did get Rick back by snatching it and hitting Rick on the head. Rick also graciously signed the hammer for the boy, Tyler. Comments by Rick ranged to Vermont not having manyhouses, it's a commune, right? That if it snowed, he was bailing. That it was "frickin' cold!"Someone gave him a homemade official looking AARP card which stood for "Also Aging Rock Stars"(forgive me if I got that wrong!) He flipped it back at them telling them to, um, well, stuff it. (Yes, I'm editing!). He mentioned he'd recently had a birthday and had the crowd sing to him. As well as mentioning Hard to Hold, did we think it, and then his butt should have won and Oscar.

During DTTS, he had warned Bill, the security dude in the cool hat he was going to get him. Bill had discretely moved far enough away to still be close, but out of reach. Sly dude! So Rick did go along the stage and had the concert virgin in front of me sing, as well as a guy, and several others. Of course he found the kids in the audience, going back to Tyler with the blow up hammer, as well as bring little 4 year old Nathan on stage to dance and sing. Both boys did a terrific job. After Nathan, Rick made mention of wanting more kids and asked if there were any volunteers. You know there was a roar from the crowd.

After non stop fun, it was over all too soon with the strains of Jessie's Girl. There was a great encore
as noted in the set list below:
Who Killed Rock and Roll
I've Done Everything For You
Affair of the Heart
Living In Oz
What's Victoria's Secret
I Get Excited
Allison
Venus In Overdrive
I'll Miss That Someday
Working Class Dog
Crossroads
Don't Talk to Strangers
Love Somebody
Human Touch (where he did leave the stage and audience romped to what appeared to be a well behaved group, he was all over the place!)
Jessie's Girl.

Encore was: Wild Thing and then Kristina

Not having been to a concert in two years, this set list was welcome to this writer and one of the best concerts I've ever been to. I've only just realized there was not a medley done, which liked when I heard it, but I liked the way the energy from this set list flowed. It was great to be out of doors even if it was standing on a harness racing track with stage in front, grand stand behind. Thoroughly enjoyed it!
- Mufi Hayes

Posted by springfieldandus at 6:29 PM