Rick Springfield's Late, Late at Night due out in July in Paperback

Rick Springfield's New York Times BEST SELLER book, Late, Late at Night is due out in a paperback edition July 5th!
New cover art and 16 pages of new photo's and a brand new afterword by Rick. Check out http://www.latelateatnight.com/ for retailers, pre-orders qualify for a discounted price!
Posted by springfieldandus at 7:44 PM No comments:

And the tour dates are rolling in for Rick Springfield

Posted by springfieldandus at 11:03 AM No comments:

Rick Springfield to play in Orlando

Posted by springfieldandus at 10:53 AM No comments: 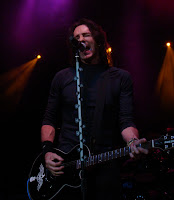 Last night’s show was an encore performance for Rick sponsored by the Central Ohio Chapter of the National Hemophilia Foundation. By far, this was the best concert experience I have ever had! Front row dead center seats for the first time. Everyone should have this experience at least once.

The show started with Who Killed Rock & Roll, a high-energy song to match Rick, who was a bundle of energy. He asked how we liked his new red shoes, which were a Converse type shoe, never saw a man wear red shoes, but of course, Rick could get away with that. He said Rodger didn’t like his shoes.

He briefly spoke about his book, to which I held up the book, I was determined to get it autographed, which later in the show, he was kind enough to oblige.

Rick asked if there were any kids in the audience. The answer was “yes” to which he said that he was surprised that they allowed kids in a bar. He said he really liked the place.

Just before leading into the bathtub version of Gloria, he said that he overfilled the bathtub in the hotel he was staying at and got the floor wet. He asked if anyone was downstairs in Max & Erma’s and wondered if they got wet, someone in the audience said that they were there. He must have gotten out of the tub and forgot to turn off the faucet when he went to answer the door when Gloria knocked! If you have heard this version of the song, you’ll understand.

Don’t Talk to Strangers is always a favorite part of the show for most people. Rick headed right off the stage straight to me. I sang the best I could, which can be a little scary when he is standing directly in front of you with a microphone in hand. When back on stage he asked for some kids to come up. There were three girls and two boys. The smallest boy appeared to have stage fright, but he did an awesome job singing when it was his turn.

While he was singing I Get Excited, someone behind me had a bra in her hand that she wanted thrown on stage. Since my seat was directly in front of Rick, she handed it to me, which I tossed at Rick. He picked it up and asked if it fit. I made sure to point at the girl it belonged to and give her the “credit”.

For the encore Rick sang I’ll Make You Happy. There’s no question about it, he DID make me happy last night! The show ended with a beautiful array of rose petals littering the floor from all the rose explosions. It was another show that did not disappoint.
Posted by springfieldandus at 9:56 AM No comments:

August 06, 2011
Thackerville, OK
Winstar Casino
Posted by springfieldandus at 9:55 AM No comments: