Rick Springfield returns to the Glass Cactus in December 2011

Thank you from Linda Blair for the Rick Springfield Birthday Campaign 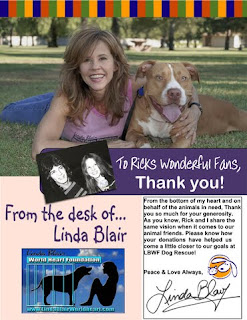 Posted by springfieldandus at 10:25 PM No comments: 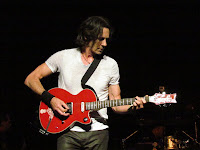 Rick Springfield at Harrah’s Cherokee Casino
Cherokee, NC
9-24-11
By: Kelley Pearson
Rick and the band never disappoint! Cherokee was a loud, high-energy show, and one I won’t forget anytime soon. The new venue at Harrah’s is very nice, with comfortable seating, new drink holders built into the chairs and a much better set-up for picking up tickets and entering the venue area. The sound system has improved as well (or did the band just turn it up louder than ever?!) I couldn’t hear very well for almost 2 days after the show! We snagged great seats in the 7th row through Rick’s fan club, which were in the center section and luckily near the isle. A perfect spot! The lighting was also incredible at Cherokee this year. I wonder if they changed that? It was a great scenario for taking nice pictures.
The show opened with Rick’s “video montage” that highlights his career from back in the 60’s to the present. Very cool! Then Rick and the guys hit the stage and rocked out to Who Killed Rock and Roll. The first time Rick chatted between songs, he commented he was glad we had 2 big screens on either side so that he could check his hair periodically. Haha! Then he said, ‘I’m so vain,’ and then something like, ‘actually, no. I’m really just one big insecure mess.’ 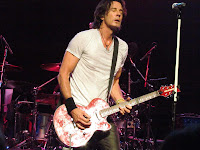 I was happy and surprised to hear Rock of Life on the set list! They also played one of my favorites, Living In Oz, which really jams out live. There were a lot of rose bouquets at this show, which is always nice for many gorgeous rose explosions. This was the first show in awhile that I didn’t take flowers, so I was glad a lot of other fans brought some. Except at one point Rick grabbed for someone’s flowers in the front side section and I heard him exclaim something and he told them they didn’t take the thorns out! So he threw the roses back to them. 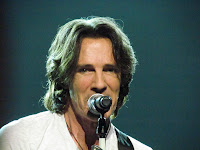 Rick found a sign someone had made which had a cute laughing/smiling photo of his “Mum” Eileen while she was in the hospital. (Don’t you know that his mother probably wanted to choke him for posting photos of her in a hospital gown?!! LOL) He had the sign on stage and talked about how his mom had been in the hospital, and that she gave them a scare but she was fine now. He marveled at how she bounces back and keeps on going strong at age 90. The sign said, “Richard, you are a very naughty boy” which he read out loud in his best Aussie-Eileen voice. Funny!
At one point someone handed Rick a pinata that looked like Darth Vader’s head. He busted it open and candy went flying everywhere. He grabbed up handfuls of candy and threw it into the crowd. I didn’t see this part, but my husband told me later that George had picked up the empty “Darth head” and was wearing it on stage for a minute. Also, a fan gave Rick a clever black T-shirt that said “I was killed off Battlestar Galactica.” Cute! He got a kick out of this. 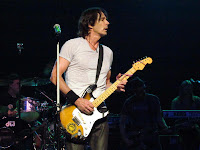 During Rick’s talking on stage he talked a bit about how he spent some time in Viet Nam in the 60’s. He also asked the crowd if they knew how old he is now, to which a lot of people screamed out “62.” He said he is proud to be a vegan, except that he does have to eat some fish now and then or else he gets too skinny, but how he feels sorry for the fish that he eats. He said he was at least trying to send a good message. Rick also suggested a book called “The China Study” which he said helped him to get off a lot of the medicines he was on, but then said he still likes to have a drink now and then because he wouldn’t want to completely “F*** it up.” lol 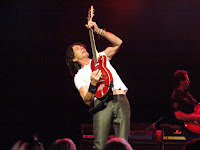 Rick then “prepared the fans” for participating in the song Venus In Overdrive by shouting out some “yeah yeah’s” and “whoa whoa” sounds, to which the crowd echoed back what he said. Then he made a monkey sound, of course just to see if the crowd would follow suit, and yes…they did! Rick laughed at this. He announced that it was a new song (okay…so it’s not THAT new anymore, haha) and he said do not go to the bathroom right now because he might launch into this---and he strummed the first few notes of Jessie’s Girl. Rick teased and grinned, “I’m not going to, but I might.”
The security at this venue is still pretty strict, as always, but nonetheless fans still venture down toward the stage to snap photos and be up close to the action. I would love to know what the security team must think each time they learn that RS will be hitting their stage again!! LOL I think Rick AND his crowd give them a run for their money! It’s comical to watch security trying to keep up with Rick when he’s crowd surfing. Anyone who has ever attended a Rick show knows how chaotic it becomes when Rick leaves the stage to mingle with his fans. When Rick ventured out for Human Touch he walked across our chairs and then headed toward the back rows, much to the happiness of the fans who were seated there. He really knows how to stir up some action. ;-) Oh yea, Rick also told the security team that they probably didn’t know what had hit them tonight. Then he said that it’s called a rock and roll show!
What a fantastic night! Rick was playful and in great spirits. Of course, I can’t recall ever seeing him live that he wasn’t fun and happy on stage. We love you in Cherokee Rick! Please keep coming back to our NC venue! 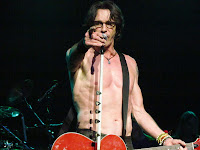 Here is the set list as best I can remember it. I am pretty sure it’s not in the perfect order, so if anyone sees this who was there, by all means…let me know if I missed anything.
Set List:
Who Killed Rock & Roll
Affair of the Heart
Living In Oz
Rock of Life
Alyson
Love Is Alright Tonight
What’s Victoria’s Secret
Venus In Overdrive
Jet
Guitar Solo & Red House
I Get Excited
Don’t Talk To Strangers
I’ve Done Everything For You
Medley of Hit Songs
Human Touch
Jessie’s Girl
Encore:
Wasted
Kristina
Posted by RickSpringfield&Us at 3:50 PM No comments:

Rick Springfield returns to the Wildhorse in 2012

The Wildhorse Saloon in Nashville, TN


Posted by springfieldandus at 4:47 PM No comments:

No presale.
Tix on sale now.

Posted by springfieldandus at 8:37 PM No comments:

ACCESS-RS presale for members 10/7
Public on sale 10/14
Posted by springfieldandus at 7:21 PM No comments:

Rick Springfield on the Daily Buzz

Rick Springfield, Sylvia Caminer and Melanie Lentz-Janney will be guests on The Daily Buzz on Monday, October 3rd. They will be showing some clips from the documentary and talking about how the project came to life! The Daily Buzz is a syndicated morning news program that airs in over 170 TV markets across the United States – or what they like to call the Daily Buzz Nation. Every morning four, very energetic hosts deliver fresh news, weather and the latest social media and entertainment trends.Hopefully, your area made the list (If not, be sure to check out their live feed starting at 6am EST).

The Daily Buzz now airs in LA … Check this link to see the 170 for local stations currently airing The Daily Buzz: http://dailybuzznation.com/local-stations/For more info on the documentary check out http://rickspringfielddoc.com/

Posted by springfieldandus at 7:32 PM No comments: