Rick Springfield rain or shine at the Ballonfest in Reddington NJ 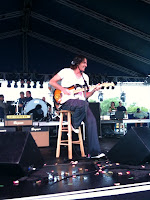 Sorry to say no pictures from this show so I borrowed one from a friend. The weather Gods were not quite cooperative. Just before the show was scheduled to start a severe weather warning was issued and the festival grounds were evacuated. We were asked to wait in our cars until it passed. Buckets of rain came down before the decision to start the show at 4pm in the rain was finally made. While the rain has slowed considerably it was still coming down as we made our way to the stage.

The stage was covered however and as Rick appeared the crew was in the process of dismantling the band's equipment. Rick took a seat on a stool with his guitar and told us that because of an early flight and lack of proper soundcheck the band would not be joining him. He also found it quite disconcerting that this was going on behind him and commented that it was like a bad dream, he was so bad that the band left and the crew was packing up.

Rick seemed appreciative of those of us that hung in there and asked for requests. A request for Souls was honored and he went on to play about 9 or 10 songs. DTTS was done sans audience participation but he did request the crowd to sing the choruses of several songs. The crowd was a bit disorganized with no one checking tickets and several umbrella's blocking the view up front. Too bad they had such an early flight because if they had waited another hour, just about the time the show was over the sun was starting to come out. Better half a show than none though! I do have to say it was kind of nice to leave the camera behind for a change and just enjoy the show!

Set List:
(I believe this is the set list, if I missed anything please leave a comment)
I've Done Everything For You
Love Somebody
Inside Sylvia
Crossroads
Jessie's Girl
DTTS
Souls
Affair of the Heart
Oh Well
IGE

Posted by springfieldandus at 12:00 AM No comments:

We traipsed up to Verona thru monsoons and a cold front, thank goodness Rick warmed us up with the jeans we've missed and the energy we love. Yellow Rick Road documentary director Sylvia Caminer was interviewing fans as they entered the venue, and security was cracking down on what they considered to be professional cameras. A lively crowd mingled and waited for Rick to join the band onstage. Oh how happy we were to see he was back in his jeans and jumping, stomping and tapping his toes in those sexy brown boots.

The show began in the usual way, the band sounded great and Matt was looking

cool in his fedora and shades. Rick was having fun and treated us to an impromptu IGE due to Matt's bass having issues and not being prepared to play VIO at the designated time. After Love Is Alright Tonight, Rick asked us to close our eyes and count to ten while he changed his shirt. The strip tease music began and all eyes were on him as he struggled out of his plaid button down and into a black sleeveless tee.

When it came time for DTTS, one victim decided to propose to his girlfriend instead of singing. Congrats! A couple of kids sang beautifully and there was some onstage dancing also. Once back onstage, Rick mentioned that Rodger hates the song Daddy's Pearl and believes that rock music began with Kiss. Rodger surprised us all by sticking up for himself with the reply, "I just don't like your music." With the exception of an excellent rendition of Celebrate Youth, the setlist didn't deviate and the show ended with a two song encore. All in all, a great show with many rose explosions and enough heat to cancel out the dreary weather.

Posted by springfieldandus at 12:00 AM No comments:

He's Got the Human Touch: An Interview with Rick Springfield

A nice interview with Rick by Examiner.com New York.....

He's Got the Human Touch: An Interview with Rick Springfield
Posted by springfieldandus at 6:14 PM No comments:

Another Tour Date for Rick Springfield

A new tour date for Rick Springfield was just posted on rickspringfield.com

Posted by RickSpringfield&Us at 10:05 AM No comments:

Check out this Article with a nice interview with Rick Springfield. 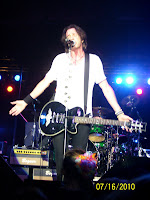 This was a very hot night. Rick wasn't coming on stage until 10pm but my Mom, sister and I drove from Cleveland so we got to the Rock-N-Ribs venue around 5:45pm. We found 5th row seats and listened to 2 other groups before Rick came on stage. While we were waiting, we noticed that Derek was putting out Rick's merchandise so we went up to him and chatted for a few minutes. He also signed autographs for us.

About 45 minutes before Rick came on stage, the audience was allowed to stand on a grassy area right in front of the stage. My sister and I headed straight over and planted ourselves in front of the stage. At 10:00 on the dot, Rick and the guys came out. Rick was wearing black pants, a white t-shirt and a black jacket, which he took off right after the first song, Mr. PC. He was also wearing glasses, which he threw off quickly as well. Rick was in a very giggly mood that evening. He told the audience that he didn't wake up until 3:00 that afternoon, he unplugged his guitar while playing, and he almost forgot the words to a song. He said, "Don't try to read a sign while singing." At the beginning of the show, a big butterfly landed on Rick's foot so he put it on his hand and held it up for the audience to see it. It was funny seeing Rick, George and George stop what they were doing to look at the butterfly. Rick took it over to one of the speakers and said, "I'm giving you the best seat in the house" and it sat on the speaker for a few minutes. It was a great moment watching Rick bond with nature.

During Human Touch, Rick made his way out to the audience and walked right in between my sister and I. He was standing on a curb so we put 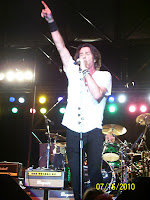 our hands on his back and held him up. On his way back to the stage, Rick walked right toward us, I grabbed his right hand, my sister grabbed his left hand and we helped him back onto the stage. He changed into a sleeveless black t-shirt, no shirtless encore that night, and finished the show by singing Kristina. It was an amazing night and the guys did an awesome job, as usual.

In anticipation of this Fall's release of Rick's autobiography, Late Late at Night, due out Oct 12th, check out this Q&A:

Tix on sale 7/29
No presale for this venue.
Posted by springfieldandus at 7:01 PM No comments: 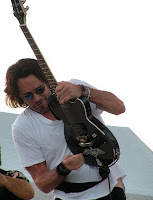 Rick and the band seemed in a playful mood. The entire center section was VIPs and only the people on the extreme sides were standing. Made it look kinda of funny. There was also a huge gap between the stage and the crowd. Rick did make fun of a lot of the VIPs...they tended to walk around. He said he was going to start calling people out if they got up...one guy he said was plugging his ears. Another guy got up and RIck said "#1 or #2"...the guy held up 2 fingers and then Rick said it would be a while before we would see him again. He also had some fun with throwing pics at people that would walk back and forth in front of the front row. Security was really strict and would not allow anyone to stand up in the big space up front (which I was surprised since there were only 2 guys). They did allow people to come up and take a quick pic and go back to their seat. A couple times, people were tying to pose with Rick in the background so he ran down the stairs and gave them a great photo op. The VIP section sat until about DTTS and then they were up for most of the rest of the show. Rick had a security guard sing (as he stood above him on this rickety ledge...I swear he was going to fall and there was no one there to catch him). Also, a little 6 year old went up to sing....she was so scared and Rick said that it was "quickly turning into a life scarring" moment. He tried to get her to dance but she just stood there...finally the mom came up on stage too. I was surprised that she actually did sing when it was her moment. She had on this little fedora type hat and Rick said that her and Matt were wearing the same hat. Matt was up to his usual antics. I actually couldn't see the whole right side of the stage (Rodger, Matt or Derek) due to the speaker being in the way but I know Matt had a girl and a boy out there on stage playing tamborine. Matt also let one of the radio station guys play his bass during HT, but I don't think he really could play because Matt had one hand on the bass doing the chords while the guy strummed the bass. I could only see this part because they stood out more in the center of stage while Rick was out in the crowd. Matt also gave chair rides (there was a desk chair of some sort) to the kids after JG and before the encore. Rick seemed in good spirits and high energy. He was even dancing/hopping off the stage at the end of the show.

Encore
Wild Thing
Kristina
Posted by rickspringfield_us at 10:45 AM No comments:

Nice review from the WI State Fair show this weekend on The Ledger-Telegram news site in Chippewa Falls. 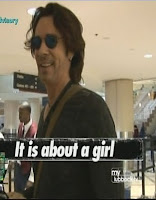 Members of the fan communities for Rick Springfield, including General Hospital, www.jasonthompson.org, and Rick Springfield Forever (RS4) Yahoo Group (among others) are combining efforts to help honor and celebrate the legendary Rick Springfield's 61st birthday on August 23, 2010.

Rick has asked that we support Linda Blair's Worldheart Foundation.

All info on the grassroots campaign can be found at:
http://rsbirthday2010.homestead.com/
Posted by springfieldandus at 9:54 PM No comments:

Almost a year to the day Rick returns to the Midland Theater!

Posted by springfieldandus at 4:00 PM No comments:

Rick Springfield talking about his upcoming book - Late, Late at Night.
Check out the podcast -

Posted by rickspringfield_us at 2:11 PM No comments: