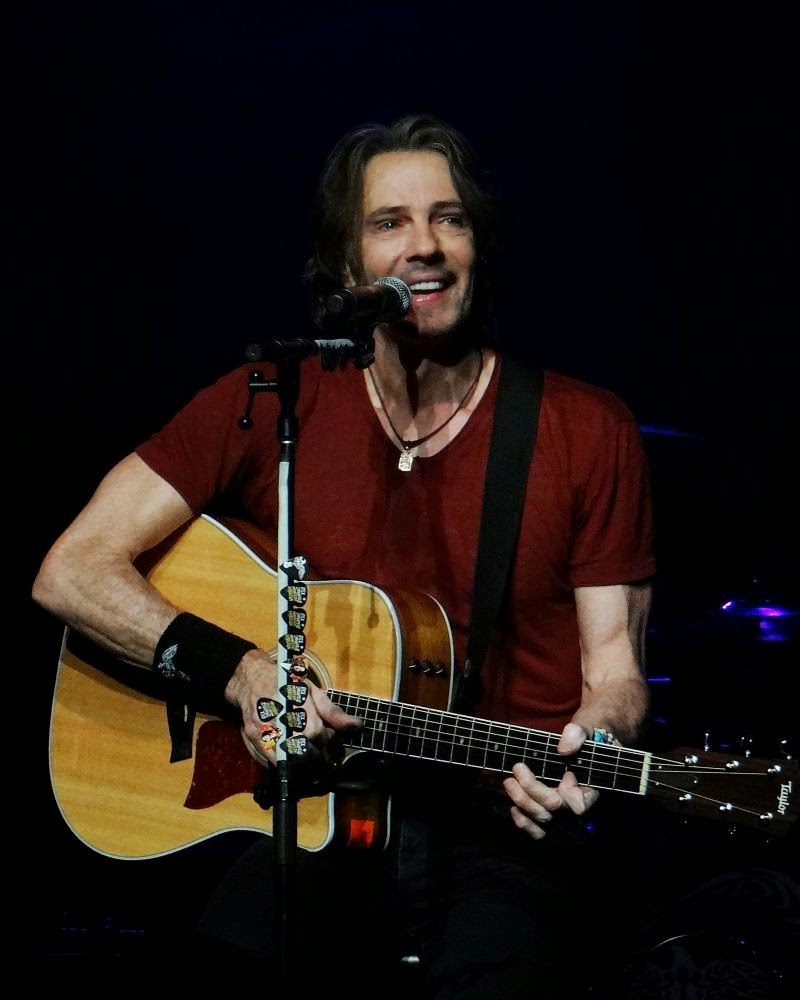 Posted by springfieldandus at 8:52 PM No comments: 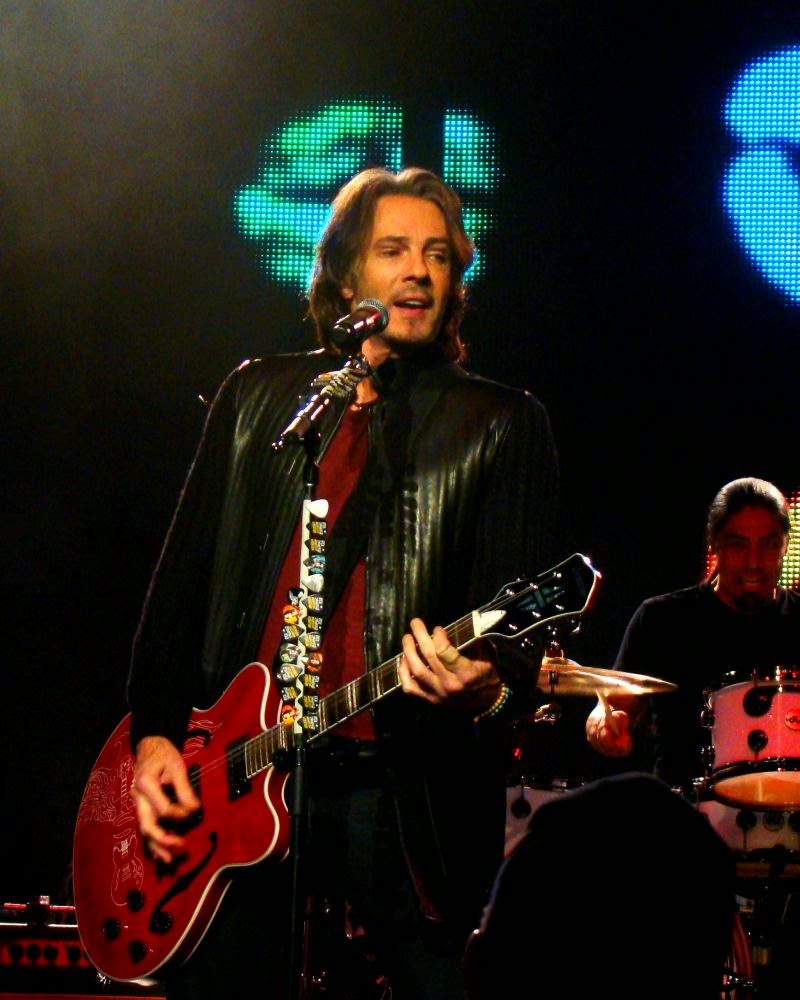 
Upon arrival at the venue we were ready to cross the street from the parking lot and up rolls a Pepto Bismol colored limousine.  Guess who was inside. I've never seen a pink limo before, and I'm sure Rick had a good laugh when it arrived to pick him up for transport.


This was the second show on the 2015 tour schedule and Rick appeared to be full of energy and happy to be on stage and back to business. I've been to many shows and actually didn't recognize a lot of faces and was surprised to see an older crowd and a lot of men. Smiles were abundant on Rick's face and ours, we even got "butt wiggles" and a few butt jokes.


Guitar picks were flying during Living In Oz, never saw so many during the first song. I have yet to catch one, though I have come close. Anyone have a spare...........?


Rick made a comment about Jessie's Girl and said "We don't do that one anymore, it's so yesterday". For all the people who have never been to a show, they were probably thinking, why did I come to the show if he doesn't play JG? 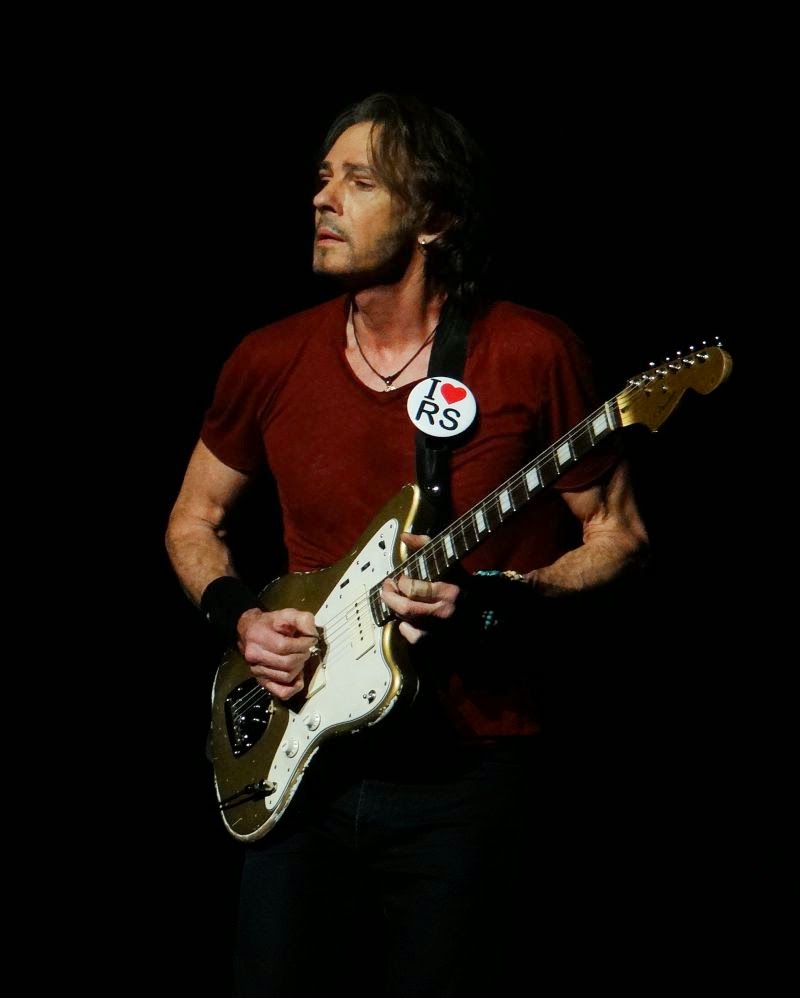 One of Rick's guitars had a large "I Love RS" pin attached to the strap and he said "that's not true, I really hate myself".    Behind the pit area there was a divider that was screaming.... "Rick you need to walk on me", so when the DTTS portion of the show came, he hopped up on it to the cheers of the audience.  He did a balancing act and faked like he was going to fall.  There was a couple directly in front of him that he asked to sing, both refused, so he moved on to other willing participants.


Rick talked about "Ricki and the Flash" stating that it will be released in August and that it is much better than "Hard To Hold". He said the "Mickey Mouse Club" was even better than HTH.


The acoustic guitar and stool came out and he said that he needed to slow down the show for the old guys. He laughed and said he was one of them.  AARP sent him a card in the mail recently and he said "don't send me that shit".  He commented that he wasn't going to retire until he falls over or fans stop coming to shows.  When he was talking about his father before My Father's Chair, the microphone went limp and he joked that someone should give it some Viagra. His father's birthday is in January and he would have been 96 years old. After he sang MFC he apologized for depressing everyone and led into Love Screws Me Up, singing about sex always makes him happy.


By the way, he did sing Jessie's Girl.  It was a great show and now I wish I would be at the three-nighter in Niagara Falls next week, I really miss the "Milwaukee Experience".

I was a little disappointed that the set list was identical to last year's. Had hopes that we would hear some variety, but Rick has been busy with other projects that sidelined him in the last couple months. Maybe later in the tour after the new CD comes out there will be some changes.


Set List
Living In Oz
I've Done Everything For You
Will I
I Get Excited
Our Ship's Sinking
Affair Of The Heart
Roar
I Hate Myself
Bop Medley
Love Is Alright Tonight
Surf Music
Wild Thing
Don't Talk To Strangers
You & Me
My Father's Chair
Love Screws Me Up
Human Touch
Love Somebody
Jessie's Girl
We Can Work It Out
Kristina
Posted by springfieldandus at 12:00 PM No comments:

Stripped Down in Sioux City 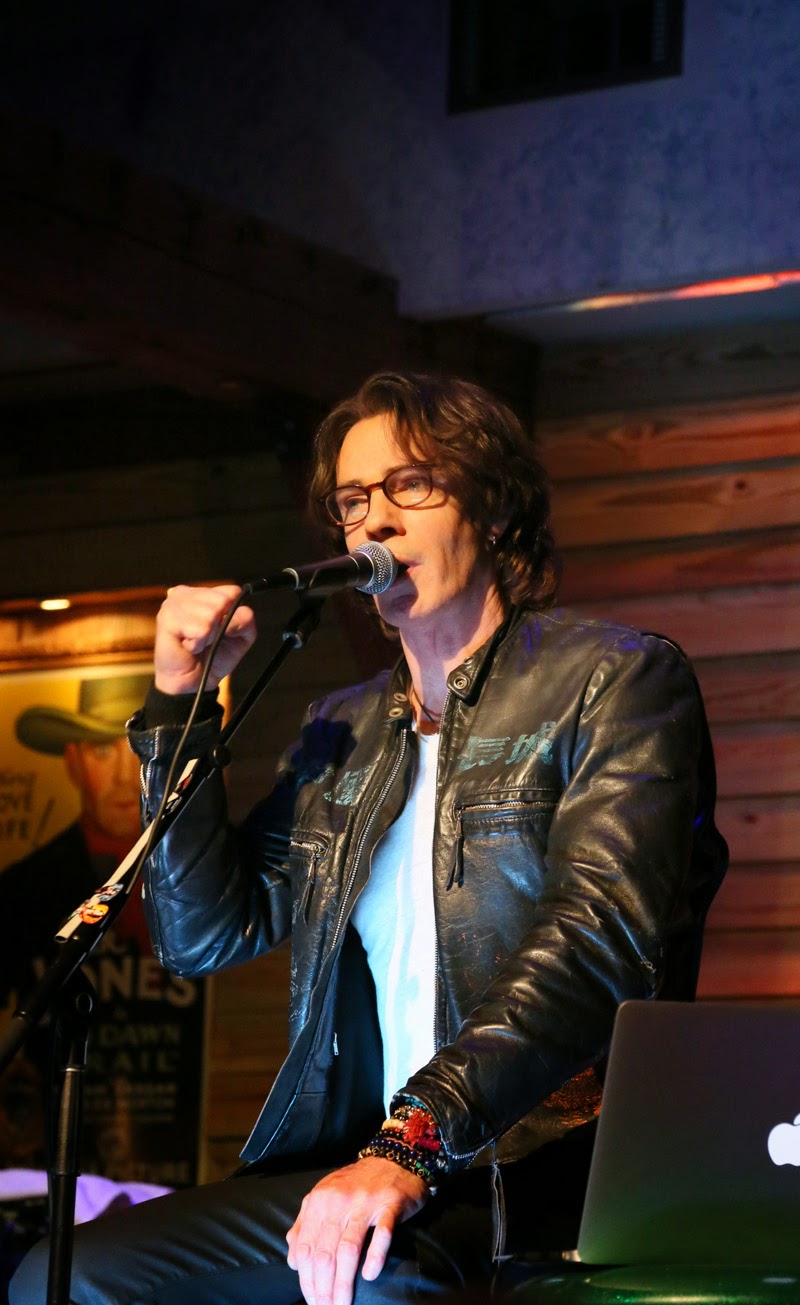 Posted by springfieldandus at 11:33 AM No comments:

All About That Bass

SYRACUSE, N.Y. -- With a "not negligent" verdict Friday afternoon in the lawsuit against singer Rick Springfield, a trial seven years in the making is over. It took jurors just 61 minutes to deliver a verdict after three days of testimony. The lawsuit itself dates back to 2007 and has gone to trial twice in Syracuse. The trial has garnered interest in Syracuse and around the world. Media outlets from Billboard to the Associated Press have taken note of the story. After all, it has been full of drama and lends itself to a headline: Rick Springfield Sued Over Buttocks. And while the case was exhausting for all parties involved, it generated a handful of comic relief (and some toilet humor). Here are some of the highlights from the trial:
#RickSpringfieldsAss The hashtag popped up on social media after a photo surfaced of the rocker's rear end. The photo was entered as evidence in the trial and quickly became the butt of many jokes on social media. Springfield's attorney John Pfeifer referred to it as the "infamous butt photo."
Mr. Heartthrob While questioning Springfield, prosecuting attorney Kenneth Goldblatt referred to Springfield as a heartthrob. Springfield, under oath, confirmed that, yes, he is (or was) a heartthrob. "I think we can establish that," he said, smiling
. Rick Springfield explains a crotch grab In response to a line of questioning about how women (and men) touch him during a concert, Springfield got clinical. "There's a pat," he said matter-of-factly. "There's a kiss on the cheek. There's a rub of my hair. There's a pat on my back. There's a pull on my arm. There's a pinch of my butt. Sometimes they grab my crotch." (see the video above)
A "hard object in his butt region" When questioned about what exactly struck her at the concert, the plaintiff on Thursday said it might not have been Springfield's butt. More likely, it was a "hard object in his butt region." "Not." With one word, the singer/actor summed up the trial's result on his Facebook page. Within two hours, it received nearly 2,000 likes.

Posted by rickspringfield_us at 11:05 AM No comments: