Tickets on sale 6/10
Posted by springfieldandus at 6:50 PM No comments:

My sister and I were very excited to find out that Rick's
Milwaukee "Freakfest" was not going to be on the same weekend as my son's birthday this year. We made plans to attend as many shows as we could, because this wou
ld be our first time attending "Freakfest." Unfortunately, we were only able to go to the fourth show because of my work schedule. We made plans with new people that we have been chatting with on Facebook to meet at the charity softball game. It was great to put people's names with faces and make new friends.
We were not sure what to expect from the show because it was the last night and all we were told was that it would be another high-electric show. The new opening montage was amazing!! It was great to see
clips of Rick from older interviews and videos, and it was cute to see pictures of him with his family.

The show started with Rick telling the audience about Stacy Creamer's (his publisher) attempts at playing softball. Rick had the entire audience in hysterics because he said that she is an amazing triathelete but she couldn't throw a softball and when she finally got a hit, she fell on her way to first base. The team from Patawotami also came up on stage to receive their softball trophy from Rick, which he said had a guy drinking beer on it and he didn't know what that had to do with softball.

The band started rockin' to great songs like Souls and Who Killed Rock n' Roll. Then, Rick told the band to take a break and he sat on a stool and sang some songs acoustically, which I haven't heard him do in a long time. It was great when Rick told the guys to come back and Rick had some Human Touch and finished the show with Kristina, one of my favorites.

The fourth night in Milwaukee was awesome!! Rick and the band rocked, we met new people and we have something to look forward to for next year.

Set List:
WKRR
LIO
I've Done Everything for You
Wasted
Souls
Acoustic:
Inside Sylvia
Ordinary Girl
State of The Heart
Electric:
It'salwaysomething
Affair of the Heart
Love Somebody
Human Touch (out to the audience & up to the balcony)
Jessie's Girl
Encore:
I'll Make You Happy
Kristina

Posted by springfieldandus at 1:16 PM No comments:

After the National Anthem, the game got under way with Rick up to bat first. He tried to get Josh to bat for him, afraid to risk injury to his newly repaired shoulder but the opposing team was not having it. Rick hit the ball and actually made it all the way home without getting out during the first inning. He also made a great catch in the field later in the game but of course it was the moment I had put my camera down.
The game was to benefit the The Wisconsin Humane Society, for which $3500 was raised. Its a shame that it started to pour because quite a few people had left before the auction of a signed mitt and various other signed items. Next year they should auction off a place on Rick's team to raise more money!
Even though Team Rick got off to a great start, by the time the game was called for rain Team Potawatomi had taken the lead and would get to claim bragging rights for the next year. The trophy would be presented to them at the show that night.
FINAL SCORE: TEAM POTAWATOMI 7 TEAM RICK 3

Posted by springfieldandus at 11:40 AM No comments:

Venus in Overdrive Night in Milwaukee with Rick Springfield

This was hands down my favorite night, just above request night.

The VIO album means a lot to me for many reasons and to finally hear ALL of it live was amazing. It was an emotional night as Sahara's Mom was there to share it with us.

The show started off with some old favorites and quickly got down to business. Some of these are great in the live regular set but some of these others should definitely added. 3 Warning Shots is one of my favorites. Oblivious was a little hard at the end for Rick but he got through it. This show was also being streamed live on Access RS. I'd love to see it again and it was mentioned on his website it would be on Access again soon.

Rick chatted on and off during the show about how some of the songs that were written with Matt came to be. I'm not sure I have the words to describe how awesome Saint Sahara sounded. The emotions were running high all night and this was the cumulation. I don't think there was a dry eye in the house and afterward Rick & the guys left the stage but there was no waiting for the encore music just some soft lighting. After a short break Rick & the band came back for what would be the encore of 3 songs.

After Rick ventured out into the audience for DTTS he came back to a silly string assault by
Matt & George. I have to give props to the band. Derek, Matt, Rodger, George B & even George N & Buzz worked hard in rehearsals for this show and it sounded great.

Set List:
Love Somebody
Affair of the Heart
IGE

Encore:
I've Done Everything for You
DTTS
JG


Posted by springfieldandus at 8:56 PM No comments: 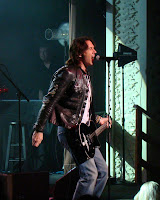 Tonight was a combination show – half electric and half acoustic. I was so excited to finally experience an acoustic set, a lot of my wishes were granted with this show. 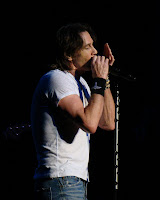 What a great way to begin the night when Rick appeared in one of his cool black leather jackets to belt out Who Killed Rock ‘N Roll, I Get Excited and Affair of the Heart. The jacket came off for Love Me Do with Rick on

the harmonica and Matt on background vocals. At the end of the song, Rick tossed the harmonica into the crowd and said “it’s yours". What a nice souvenir for a lucky fan.

The band disappeared backstage and Rick made himself comfortable on a stool to begin the acoustic portion of the show. It was unusual to see Rick stationary and not moving all over the stage.

There was a “Wheel of Songs” on stage which had the top 19 requested songs that fans voted for on rickspringfield.com. Rick invited fans individually on stage to spin the wheel, each giving him a kiss on the cheek or a hug. Several fans got smart by not spinning the wheel and just moving the wheel to the song they 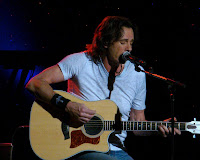 wanted to hear which Rick got a kick out of. This part of the show was a treat for many since it included songs that he rarely sings live. Lust lead the list, followed by Karma, and Big Beautiful Friday Night (Hey, Maria). I almost melted when State of the Heart came up on the wheel, I’ve waited seven years for this since I’ve only heard portions of the song in the medley. Perfect and Written

in Rock were next by the luck of the wheel. When Rick introduced Honeymoon in Beirut, he mentioned that it was a song about his wife, Barbara. To everyone’s cheers, Pretty Little Mess came up on the wheel. He said this was one of the top requests. Rick really needs to add this to his set list because everyone loved hearing the song. 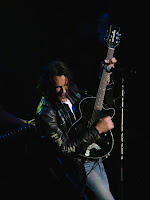 After the request portion, Rick said he was getting bored and wanted the band back on stage. I really enjoyed the acoustic version, but when the band started rocking with Itsalwaysomething, there was no question that rockin’ is what Rick does best. The energy returned to the stage. The electric set list continued with IDEFY, Love Somebody, and Jessie’s Girl. The encore included a shirtless Rick singing I’ll Make You Happy and Kristina, which is always

a crowd pleaser, except when it's the last song, it also brings an

end to an awesome show.

Electric:
WKRR
IGE
Affair of the heart
Love Me Do w/matt on background vocal and Rick on harmonica
Accoustic (the wheel)
Lust
Karma
Hey Maria
State of the Heart
Perfect
WIR
Honeymoon in Beirut
Pretty Little Mess
back to electric
Itsalwaysomething
IFEFY
Love Somebody
JG
Encore
I'll make you happy
Kristina
Posted by springfieldandus at 10:41 PM No comments:

May 18th 2011
Milwaukee, WI
Night one of four!
Tonight was billed as a High Energy Electric Set. It was a pretty normal set list with a teaser of Zoot's version of Eleanor Rigby thrown in as Rick talked about the 2011 cruise, where Zoot will reunite after 40 years. The band was in great form and Matt couldn't resist spraying Rick occasionally throughout the night the the silly string provided to him
by Buzz, and Rick was sure to retaliate. He made is way out into the audience for both DTTS and Human Touch having a bit of a time navigating the new layout of the theatre. The night ended on a high note with a shirtless encore and the promise of 3 more nights!

Set List:
Who Killed Rock & Roll
I've Done Everything for You

Encore:
Wasted
Kristina
Posted by springfieldandus at 7:00 PM No comments:

Cruise Update:
The 2011 Rick Springfield & Friends cruise will include the following guests: 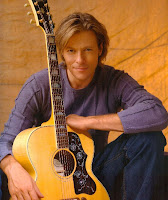 Singer/Actor Jack Wagner will be joining Rick, Zoot & Mark Goodman on this year'...s cruise! He'll be performing & answering all your questions about being an actor! Get
more information on Jack and make your reservation at www.rickspringfieldcruise.com 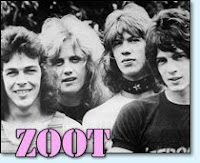 Zoot will be playing their first show in 40 years on this year's Rick Springfield & Friends Cruise! Beeb Birtles, bass guitar (left) was a founding member of Little River Band,


Darryl Cotton (lead singer) (next to Beeb) had solo Australian
hits and was a TV star in Oz. Rick Brewer (drummer) (next to Darryl) had a band called the Ferrets who had a big hit in Australia after the Zoot and Ricky (yes Ricky) Springfield (lead guitar) is your host for the cruise!

Mark Goodman of Sirius Radio, VH1 and MTV fame is back as well as your host!

Posted by springfieldandus at 9:38 PM No comments: