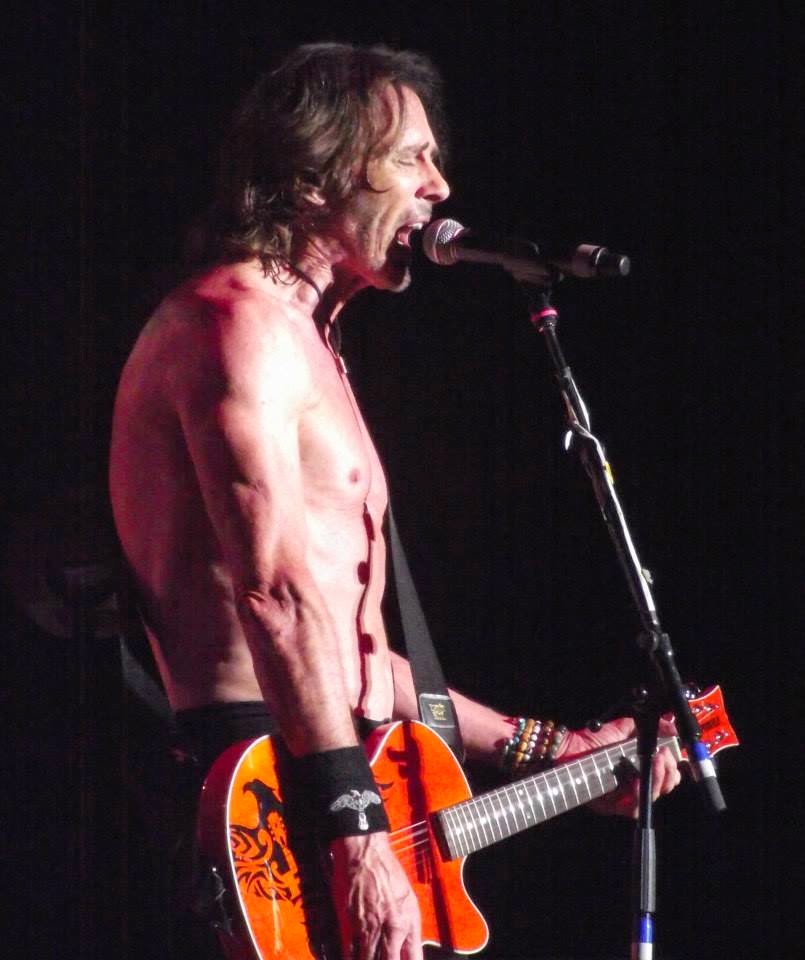 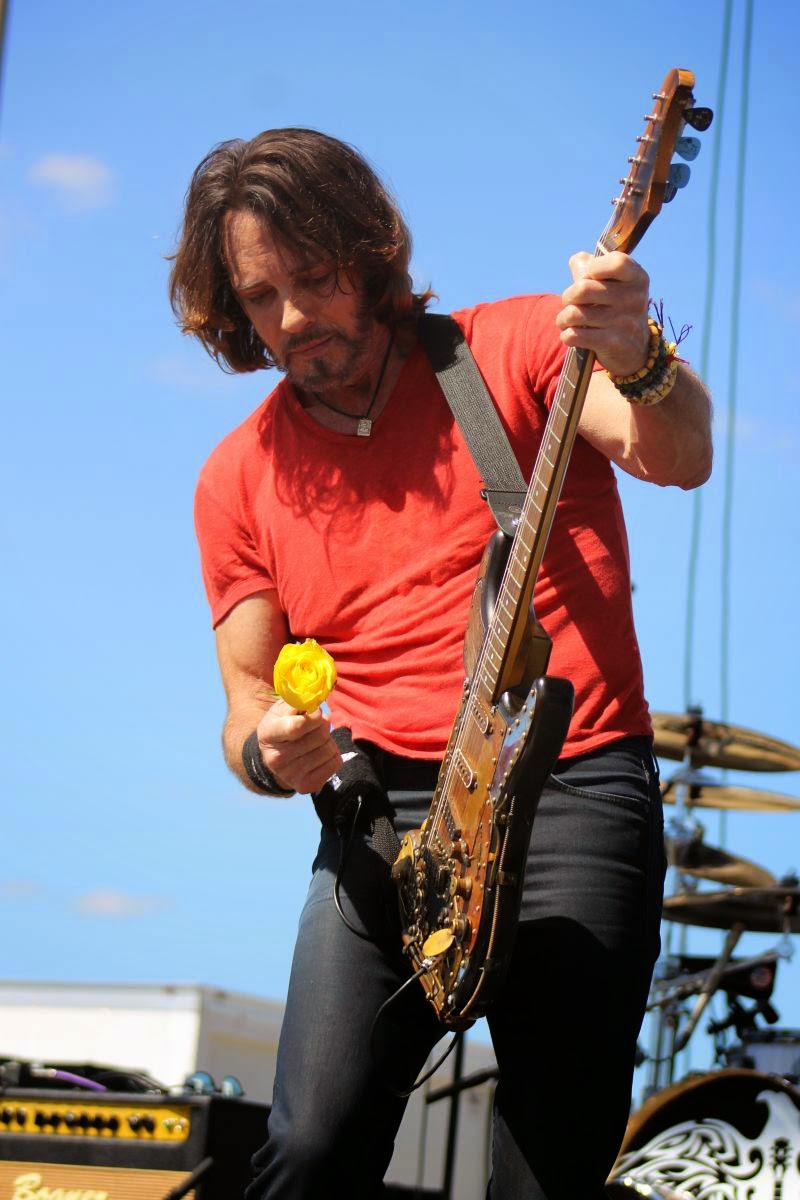 Review & photo by B. Minett


Set List:
Living in Oz
I’ve Done Everything for You
I Get Excited
Our Ship’s Sinking
Affair of the Heart
Roar (Katy Perry cover)
Happy Birthday (asked audience sing to him)
I Hate Myself
Bop medley (Bop ‘Til You Drop/ Celebrate Youth/ Calling All Girls/ Jessie’s Girl snippet/ Don’t Walk Away/ State of the Heart/ What Kind of Fool Am I)
Love is Alright Tonight
Surf guitar music
Wild Thing (The Troggs cover)
Don’t Talk to Strangers
Love Somebody
Jessie’s Girl


Concert Notes:
* This FREE concert was part of Family Day at Western Illinois University (WIU). The stage was set up outside in the tailgating parking lot before the college football game (cars and tailgaters were set in the back of the lot). Many fans were waiting hours before the concert start time, to secure their place by the stage (though security wouldn’t let anyone stand right up at the stage, but wanted an emergency aisle left open between the stage and the audience). Those  who were there earlier, were able to watch the sound check, minus Rick. During sound check, George N said this was probably the earliest time (1:30-2:30PM) they had played a show, but Matty said maybe it was the earliest George had, but Matty remembered a concert years ago at 7:30AM. By the time the concert started at 1:30PM, the parking lot section set aside for the concert was full of people, many wearing WIU’s school colors, purple (which Rick noted during ‘Jessie’s Girl’ after the ‘where can I find a woman like that’ line, by saying, “I’m pretty sure she’s wearing purple!”).


* The weather was perfect for an outdoor concert, with sunny, blue skies and not-too-warm temperatures. The past few days before had been very gray, rainy, and unseasonably cold in IL, so it was nice to have a beautiful fall day for the concert.


* The set list was shorter than usual, with no encore, as Rick was only scheduled to play for one hour.  Because this was an outdoor concert during the daytime, there were no screens and videos to accompany the songs. Nonetheless, Rick gave a very high-energy performance, so it didn’t seem as if anything was missing without the videos. After the concert, I spoke with a WIU college student, who raved how much he enjoyed the show. He said he attends to a lot of concerts, and this was one of the best performance-wise he has ever seen – something he wasn’t expecting. He said he’d even PAY to see Rick again!


* As much as I enjoy hearing Rick perform the cover songs, with a shortened set list, I wish he had left them out and played a few more of his own songs. When he started playing ‘Roar’, I heard some fans behind me trying to figure out what song it was, because although they knew Rick’s music, they hadn’t seen him in concert in a while, and didn’t know Katy Perry’s song was a part of his current set list (and he didn’t really introduce it except to quickly say he liked a girl anthem as much as the next guy).


* Rick asked the audience to sing ‘Happy Birthday’ to him, because he said he likes to celebrate his birthday the month before and after his actual birthday. He also commented how birthdays seem to arrive faster now. After asking the audience if they knew how old he is – fans up front yelling out the correct age - he said he still feels 17.


* Because the stage was set very high, with no stairs at the front of the stage, Rick wasn’t able to go out into the audience for ‘Don’t Talk to Strangers’, but instead stood at the edge of the stage and motioned for people to come forward; he said he wasn’t calling to anyone in particular, just anyone who was brave enough to step forward to sing. He only had one person from each side of the stage sing, and then a 6-year-old girl was boosted onto stage to dance and sing with Rick. There didn’t seem to be many young children in the audience, which was surprising since this concert was part of WIU’s Family Day.


* As Rick was leaving the stage at the end of the concert, he stopped at the far left side of the stage to sign autographs on things people were holding out to him. Since he didn’t play ‘Human Touch’, wasn’t able to go out into the audience and wasn’t coming back for an encore, it would have been nice if he had walked along the entire length of the stage for high-fives and autographs. I’ve been to concerts where other performers will do this, walk the length of the stage for handshakes, autographs, and even selfies, at the end of the show. People on the right-side of the stage started holding up things for Rick to sign, too, and were disappointed that he didn’t head back that way before walking off the stage.


* Who was there: Rick on lead guitar and vocals, George B on guitar, George N on bass, Jorge P on drums,  Paul on keyboards and guitar, Matty (sound guy), and guitar tech, Ruben – so nice to see him back doing what he loves! And all of Rick’s guitars were tuned right, with no obvious guitar issues.


* What he wore: Rick came out in a black leather jacket, red tee, black jeans, black high-top converse sneakers, and sunglasses. He took the sunglasses off after the first song, and he took the jacket off after the first three songs.
* Rick had a full beard (peppered with gray), which he said he had grown for his upcoming movie role. He joked that he would be in the movie with an “up-and-coming actress”, saying “I don’t know if you heard of her? Meryl Streep? I hear she’s gonna be pretty big.” He also was constantly having to hike his pants up, and said that was because they wanted him to “get skinnier” for the movie role and he forgot to bring his belt.
Posted by springfieldandus at 2:47 PM No comments: