Mark welcomed us to Richards set. Richard Marx was joined by The Squirts-Matt B, George B, Rodger and special guest on keyboards, Rick Springfield. Richard Marx was quite impressed with the band! He gave them big props for learning all his songs but did comment that the keyboards sounded a bit weak and thanked the crowd for the warm reception.

Before playing Hazard he commented that "a song he t

thought was the worst thing he’d ever written, but his wife loved it and so did the fans, it became one of his biggest hits" He also joked that it was from his huge mullet days and the Dick jokes once again started when he mentioned that the other Dick had one too. Who had it first was tossed around and it was decided that Rick was older so he must be the first Dick to have one. During one of the ballads, (my notes are a bit fuzzy here. lol) Richard called them pussy ballads and the band took a break, union rules Matt explained. The band and Rick joined Richard for the last few songs again. It was fun to see Rick in the background, not center stage doing his thing for a change. He was bouncing around while playing the keyboards and really seemed to be enjoying himself.

Set List:
Love Goes on??? Not sure about this one
Endless Summer
When Your Gone
Angelea
You Never Take Me Dancing
Hazard
Now and Forever
Keep Coming Back to You
Over My Head
Ain’t No Sunshine
Hold on to the Nights
This I Promise You
Satisfied
Better Life (cover Keith Urban)
Should’ve Known Better
encore: Right Here Waiting

Some my friends and I were in the first photo session group. I wasn't quite sure what to expect after last year but I was very pleasantly surprised with the set up. Each celebrity was stationed with someone to take your camera and picture, and another to hold your stuff while you met each one. They were all very gracious and made sure a picture was taken and you got your signed photo provided for you. If you were quick you even got a few words with each. After meeting all the celebrities you went around the corner and you had your minute with Rick. It was actually quite organized and I think most if not all were happy with it. 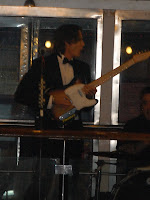 r formal captain's dinner it was time to head to the Lido deck where everyone on the cruise, not just the Rick fans would be treated to an outdoor, under the stars concert. All the celebrities were there and really seemed to be enjoying it as much as we did. Rick joined us still wearing his tux and bow tie from our formal dinner! We would be treated to almost all covers during the show with appearances by Richard, Brandon & Doug. The entire band was up on stage hanging out playing various instruments during the show too! I know I even saw Ronnie playing drums at one point.

The show started with Crossroads and then into a slightly different bathtub version of Gloria describing how he was in the bathtub when she rang the bell, and then because he has a man crush on Richard Marx, he joined into the bathtub, then Doug comes in and wants to join and wow Gloria is getting pretty kinky – 2 Dicks in a tub plus Doug! Next up wa

s part of Pretty Woman and this is when Rick decided much to George N's astonishment to toss his guitar into the pool below. Lucky there was a net covering it! Rick introduced Richard Marx and said that since they didn't have time during his set he should play It Ain't Nothing and Rick joined in on tambourine. Brandon was invited up next to join in on a Rolling Stones song. Doug not to be out done by the musicians in the group made his way to the mic to join in I Want You To Want Me, since its the only song he knows (Ricks words I believe). To add my own two cents here I really enjoyed that ALL the celebrities participated in ALL the events this year. Even when they didn't need to be at one they were all in the audience enjoying the performances!

Posted by springfieldandus at 6:14 PM