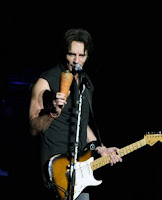 Saturday, May 12 - Final show of the 5 day extravaganza in Milwaukee (or Freakfest as Rick calls it). Rick attempted to do The American Girl by request (with furnished lyrics) but he really didn't remember it, he did a part of the Christmas song again, and Wild Thing. It's a little odd that he talks about his favorite part of the Milwaukee shows is when fans bring lyrics and he does requests and with the exception of American Girls, he didn't do any of that this year. hmmm. The shows at Potawatomi are still going to be the most varied set list you'll probably ever get, and that seems to be what the fans enjoy so much....that and being able to stay in the same place and enjoy back to back shows. Rick pulled out "Pandora's Box" one more time and was dared to drop his pants (or rip his shirt off). He didn't do either one - I guess two out of three wasn't bad. Jesus Saves, which has disappeared from the set list as of late, was performed four of the five nights. Rick seems to enjoy it and it seems to be a fan favorite out in the audience. We'll have to wait and see if that was a temporary addition. At the end of the show, Rick did say "see you next year", so it looks like Freakfest 2008 might be in the future.
The full set list from the show was:
Who Killed Rock N Roll
Will I?
Affair of the Heart
Alyson
IDEFY
Rock of Life
Living In Oz
Christmas Song
Red House
DTTS
Medley
The American Girl
Love Somebody
Jesus Saves
My Generation
Wild Thing
Human Touch
Jessie's Girl (in the audience)
Love is Alright Tonite
More pictures can be found at the Picture Spotlight.
Posted by rickspringfield_us at 2:58 PM