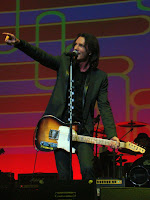 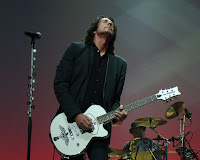 On the drive to the concert I was listening to Who Killed Rock “N Roll, and was thinking I hadn’t heard him sing it for a while. Guess what he started the show with…WKRR.
At one point, security decided that they didn’t want fans standing too close to the stage. Rick was disappointed when they were shooed back to their seats and commented that it was a downer that people were getting into the show and had to move back. He was cute when he mimicked fans walking back to their seats with sad faces. He warned the “white shirts” to not do it again.
During Don’t Talk to Strangers he stood at the edge of the stage and asked a few fans to sing. He didn’t venture into the crowd as he usually does.
To the crowd’s delight, for Human Touch he did come out, instructing us ahead of time to be careful of his shoulder. He covered a lot of territory during the song.
For the encore, he sang Jesus Saves, which was a treat. Rick seemed to enjoy the evening and we’re all glad he is back in his element!
Posted by springfieldandus at 9:19 PM