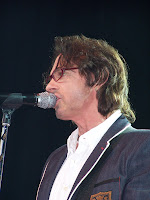 Rick & Co returned to the stage tonight after nearly a month long break to record the new album. While we didn't get any new songs, we did get new clothes and a varied set list.
Rick hit the stage wearing his glasses. I think he might have forgotten to take them off because they were gone after the first song. New jacket, with some kind of emblem on it and red stitching and new jeans. Rick surprised us by going into Will I after WKRR. Nice change. Inside Sylvia was awesome too! Rick told the crowd about how he had slammed his finger in the door at the Henson Studio, where they are recording the new album. The home of Kermit the Frog (Rick's words). This particular bout with clumsiness required 7 stitches he proudly told us. He commented that the album was moving fast. He was quite chatty and asked if any one had any good scars they could show him. And then he said never mind, he would see them all on the cruise.
The band was in rare form as well, joking around behind Rick's back. At one point Rick said if they got more Starbucks gift cards they would finish the album quicker. So of course some one threw one up. Rick put it on the amp and when he turned around Rodger snuck out from behind the drums and grabbed it. They all really seemed to be enjoying playing together and to be back out on the road. Next thing you know Rodger is throwing loofah's (they were give aways at the hotel) at Rick, They must have raided the housekeeping cart. He then asked who could spell Loofah. Someone in the crowd got it, a backstage pass was promised but not sure that ever happened.
There were two really cute kids on stage for DTTS. One was about 4 and quite shy. She didn't want to sing even though Rick tried his hardest to convince her. Her older sister did it for her. He had his "gay" moment with George and out into the crowd he went, signing a few things as he went along and getting stuck for a little longer than he probably wanted at the back of the venue. While in the crowd someone asked about GH and he replied "Yeah I know I am supposed to be a Grandfather on that stupid show!" He survived the crowd and made his way back to the stage for Jessie's Girl and then off stage. 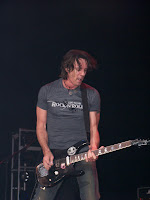 Back for the encore and the wait was worth it because we got two songs. There just happened to be a new shirt for sale at the merch table. A grey Who Killed R&R shirt, the the first couple of line of lyrics on the back. It was a really nice shirt and Rick even modeled it for us during the Encore. Its really nice to see some SDAA stuff coming back to the set list.
Hopefully I covered everything, if I did miss something, feel free to leave a comment! Well, its late and we have another show tomorrow!
Set List (Not necessarily the correct order)
WKRR
Will I
Affair of the Heart
ROL
Kristina
Alyson
Inside Sylvia
Ive done Everything for You
Crossroads
Medly
DTTS
Love Somebody
My Generation
Human Touch
Jessie's Girl
Encore:
I'll Make You Happy
Love is All Right Tonight
Posted by springfieldandus at 1:31 AM